More than a Month after Filing FOIL Request with the City of Rochester, NY for the Name of RPD Officer Caught on Video Kicking her K-9 Partner, Then Having Request Denied, City Concedes to My Relentless Efforts and Releases Name... RPD Officer Nina Nowack 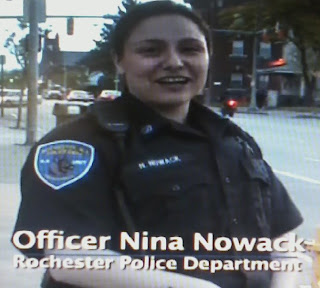 There's a lot to be said for perseverance.

On October 12, 2012 I filed a FOIL request with the City of Rochester, NY for the name of he Rochester, NY Police officer caught on video kicking her K-9 partner.

After more than a month of being bounced around and given a run-around from City officials, my FOIL request was denied.

At this point, most people would have simply given up.

I'm not most people.

While Rochester, NY Police and City officials pulled out their stall-tactics and intentionally prolonged my request, only to deny it, in hopes that his would all just go away,  I was committed to continue the fight, and expose them every step of the way.

In fact, just a few days ago, when I called the  City to inquire on the status of my request,  like I had done several times over the past several weeks, I was informed by the Records Access Supervisor, Ms. Sylvia Rossello, I was prepared.

So, when I was informed that my request had been denied, I was told that Rochester, City Attorney Jeffrey Eichner was the person to talk to.

So, I recorded the entire conversation with Eichner, who pretty much stumbled throughout, at one pont even acting as if he had misunderstood my FOIL request, which was very straightforward -- the name of the RPD officer who kicked her partner.

You see, one thing about me is, I will expose misconduct, corruption, cover-ups, whatever it may be, to the world, so that everyone can see for themselves.

I then called Gary Walker, the City of Rochester, NY Communications director, whom City Attorney  Jeff Eichner had indicated, had made the decision to deny my request.

After a little phone tag, where to Mr. Walker's credit, he called me an hour after Rochester City Hall had officially closed,  I was finally able to speak to Mr. Walker, who I must say was very professional and courteous.

I told Mr. Walker that I realized we each had our roles to play, his, as Jeffrey Eichner's is to protect the City.

Mine is to expose police misconduct, corruption, cover-ups and demand transparency and accountability.

Which, if you think about it, is all this was about from the beginning.

Gary Walker has known me for many years.

He knew my Dad's relentless passion as an activist and he knows mine.

Long before he began working for the City of Rochester, Walker worked for WXXI television, Rochester's PBS outlet, where he executive produced and hosted a weekly community television program called 'Need to Know.'

Gary Walker is a smart man.

Like he said to me in our phone conversation, wrong is wrong and right is right.

And I believe he realized that the City of Rochester and the Rochester Police department were just making  things worse, by prolonging, and ultimately denying my FOIL request.

Which is why Walker decided to release the RPD officer's name who was caught on video mistreating her partner.