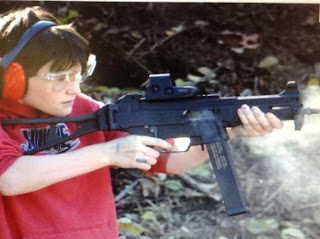 Did you know that Wal-Mart is the country's biggest gun dealer?

But I guess it makes sense, when you consider that Wal-Mart, which makes approx. $34,880 in profit every minute, is the country's biggest retailer and employer, with over 4,200 stores in the U.S. alone, as of 2012.

In the wake of yet another tragic shooting, this time in Newtown, Connecticut, where 20 year old Adam Lanza opened fire at Sandy Hook Elementary School, leaving 20 children dead, once again there's a lot of talk about guns, America's obsession with them, and their readily availability.

Which, is where the giant retailer comes in.

For years, Wal-Mart has raked in profits from selling semi-automatic, assault type rifles such as the AR-15.

For three weeks in October of 2002, John Allen Muhammad and Lee Boyd Malvo went on a shooting spree along Interstate I-95 in Washington DC, Maryland and Virginia.

Muhammad and Boyd drove around in a 1990 blue Chevy Caprice, killing a total of 10 innocent people and leaving 3 critically wounded.

Their weapon of choice?

When James Holmes shot 58 people, killing 12, in an Aurora, Colorado movie theater, it was an AR-15 he used.

When Jacob Tyler Roberts opened fire in an Oregon Mall, it was an AR-15 he used to kill two shoppers and wound a third.

The rifle, as well as two handguns he had, belonged to his mother, Nancy Lanza.

There are reports that Adam Lanza had some mental health issues.

In one incident Adam Lanza became irate, began yelling at his mother and kicked her out of his bedroom, demanding that she stay in the hallway, directly on the other side of the door.

Nancy Lanza laid on the floor in front of the door, through the entire night, with her son periodically checking to see if she was still there.

She eventually fell asleep on the floor.

What is perhaps most disturbing is that knowing her son had some obvious mental health issues, Nancy Lanza introduced a young Adam to guns, even taking him to the shooting range, to, as friends of Lanza described, 'boost his self esteem.'

On that Friday morning, Nancy Lanza was the first shooting victim, as her son shot her four times at point blank range while she slept in her bed.

Americans have an obsessive love affair with guns.

In fact, as I'm sitting here writing this, the news on the television is reporting that firearms and ammunition sales increased immediately after the Connecticut School shooting, mostly from survivalist-type gun nuts who fear a Government ban on assault rifles and magazines.

I think it's sick that as the innocent children of the Connecticut School shooting are being buried, Americans are cleaning out gun store shelves, buying out anything and everything they can get their hands on.

It certainly shows an obsession.

It also shows a paranoia.

As the son of Cuban refugees who came to the U.S. in 1968 fleeing a tyrannical communist police state, first of all, I do believe in the Second Amendment... it comes right after my favorite amendment in the Bill of Rights--that being the First Amendment of freedom of speech, etc.

However, the historical context of the Second Amendment is open to interpretation (being forced to house British troops,, need for militias, etc.--we were in a revolutionary war, for God's sake).

But, again, as I said, I believe in the Second Amendment.

But the paranoia currently in vogue in the U.S. especially after President Obama's election, about a totalitarian government taking over, is absurd.

Through my parents and my Cuban-born brother, I feel I have some knowledge and say in this: this fear of a tyrannical US government takeover of every aspect of life is overblown and borders on paranoia.

In today's U.S. reality, rather than fearing Big Brother, we should fear Big Business, with its ever-expanding capacity to collect our private information, even our medical records in some cases.

The flood of money and power wielded by Corporate America makes our government weaker each year.

While I don't advocate a totalitarian state... who would?.. come on, do we want an anemic, powerless government?

Besides, if the government ever did turn on us per this fantasy, don't you think their tanks, military fighter jets and remotely operated drones would kind of beat assault weapons?

Do these people advocate selling RPGs and bazookas to the general public as well?

Lets get real... so that we reduce the chances of an incident like the Sandy Hook massacre.

Societal murders, while unacceptable, of course, should not turn into mass killings and massacres... they do so because of the fire power of these types of weapons and the ease of obtaining them... again, their readily availability.

There are more regulations about driving a car than owning one of these military-style weapons.