Photographer at West Webster, NY Firefighter Funeral: "You were in my fucking shot!" 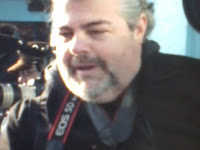 Upon arriving, Spengler opened fire from on top of a berm on the shore of Lake Ontario.

These men are the real definition of heroes.

They responded that cold Christmas Eve morning ready to save lives.

Two of them lost theirs.

The response and support not only from the community, but from throughout the country, and the world, for these men, has been a beautiful thing.

At a candlelight vigil held on the corner of N. Main St. And Route 250 in the town of Webster which I covered, a West Webster Fire official read off just a few names of more than 60 countries, who had offered their condolences, including the United Kingdom, Japan, Ireland and France.

Locally, support has been described as 'overwhelming.'

Many say that one good thing that has come out of such a senseless tragedy, is that it has brought people together, and has brought out the best in people.

Sadly, it has also brought out the worst in some.

Take, for example, a photographer at the funeral of firefighter Tomasz Kaczowka, on Monday December 30th at St. Stanislaus Church in Rochester, NY.

As I was photographing and recording the services outside the church, awaiting Tomasz Kaczowka's casket to arrive on board a West Webster fire engine, a photographer began yelling at an African-American freelance photographer from Buffalo, NY.

At first, I didn't really pay much attention to him as I knew he was not talking to me, since I was about 10 feet away from him.

Then he continued, only this time in a very angry tone, demanding that the young man move, before yelling at him, 'You were in my fucking shot!'

All this, less than 50 feet away from the front doors of the church, where firefighter Tomasz Kaczowka's casket had just been carried in, and within earshot of a sea of first responders paying respect to a fallen hero.

This photographer, who I have not yet been able to identify, represents what is wrong in today's society.

No respect, and a 'get out of my way, it's all about me' attitude.

The fact that he behaved like this, in of all places, a funeral for a young man who paid the ultimate price as an unselfish hero, who responded that day ready to save lives, makes it even more disgusting.

It's really sad just how ignorant some people are.

In the video below, which I started recording after he had used profanity, the photographer becomes furious with me when I not only defend the young man, but also call him out for his unprofessional conduct, including swearing at a funeral.

At one point he says to me 'You're not even supposed to be here', and even questions whether I received some sort of 'special clearance' which I didn't need, even if I didn't have my press credentials, which I did.

Time and time again, throughout the country we have seen cases such as Emily Good's, the Rochester, NY woman who was arrested by RPD officer Mario Masic after after videotaped him conducting a traffic stop, where it's usually law enforcement who violates citizen's first amendment rights by questioning, prohibiting and in some cases arresting them for videotaping and photographing police.

But, you would think that a photographer would be the last person to question my right to take photos on a public street.

The reason why I went to document a very tragic and sad event was so that thousands of others who couldn't be there can see it on the Internet.

People like this Houston,Texas woman who left the following comment on the video of the funeral for firefighter Mike Chiapperini, which I also covered and posted on my YouTube channel: DavyVTV.

'Well I for one thank you for recording this. My husband and I wanted to be there, I looked up flight tickets to see if we could go. My husband is firefighter for the Houston Texas Fire Department. We couldn't afford to fly up there after all and finding a flight right after Christmas was near impossible and the few I did find were way over priced for us. At the same time, on Christmas Eve, we had one of our police officers shot and killed, his funeral was yesterday as well so I attended that.'

If you recognize this photographer, and know his name please contact me.

Click Play below to watch a video where I address this man's conduct, especially his use of profanity at a funeral.