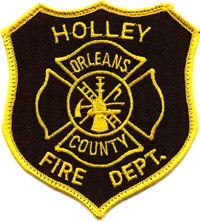 Less than two months ago I covered the story of the West Webster, NY firefighters ambushed by William Spengler, while responding to a fire he had intentionally set on Christmas Eve.

Tomasz Kaczowka and Mike Chiapperini were both killed and Joseph Hofstetter and Theodore Scardino were seriously injured.

The story reached internationally, with fire departments as far away as Europe and Africa reaching out to the small New York town with their condolences.

When I think of these men, who responded that cold morning ready to save lives, and instead ended up losing theirs, it saddens me.

One just doesn't associate or in any way imagine the words 'firefighters' and 'violence' in the same sentence.

Which is why when I heard that the Holley, NY Fire Department was holding a Squirrel Slam, a fundraiser where people, including children as young as 12 years old will shoot as many squirrels as they can, I couldn't believe it.

The "7th annual Hazard County Squirrel Slam" which sold out of its 1,000 tickets will be held today.

Here's how it works.

Participants, including children as young as 12 years old, shoot squirrels, then enter up to five squirrels for weighing at the end of the day.

Prizes are then given out based on the weight.

Those prizes will include guns.

Among the guns will be an AR-15 "Assault Rifle" in .22 caliber, a similar version of the one used in the West Webster, NY ambush and the Sandy Hook Elementary School shooting in Newtown, Connecticut.

"People were just outraged and in disbelief that a fire department could have such a disgusting scheme as a fundraiser that draws in children and rewards them for killing,” Edita Birnkrant the New York Director of Friends of Animals said.

"There's no place in a civilized society anymore to have these kinds of contests anymore and it makes it especially disgusting that they're drawing children in,” Birnkrant said.

Friends for Animals is among those groups now lobbying some New York State lawmakers to pass a ban on all competitive hunting events.

Some will argue that this is nothing more than hunting.

They will say it's competitive hunting.

I call it what it is, an all out mass killing contest, where even kids have one thing on their mind -- to KILL.

In fact, they are rewarded for KILLING.

Many in Holley support the event.

"It's a way of life around here, some people don't realize the squirrels do, do some damage,” said Holley resident Ed Merritt.

"The squirrels are a nuisance they do more damage than…they are fuzzy tailed rodents,” Alfred Pulcino, another Holley resident said.

Holley's town clerk said "You don’t understand, every official in this village is 100% behind this event. Our values, our way of life, our culture, is about hunting."

The Holley, NY Fire department got the name "Hazzard" from the 70's television show, "The Dukes of Hazzard.'

Protesters from the New York City area arrived in Holley on Friday and the locals are angry.

"People around here they do kill these animals but they eat them, they use their pelts, they're not going to waste and as far as these people? They can go back home where they come from,” said
Kendall, NY resident Urb Bennett. “We don't go to their community and protest. All we want to do is come out here and be left alone.”

And as far as this being a "fundraiser", don't be fooled.

An account was set up and offered to the City of Holley, NY to call off the event.

"It is apparent to me that the town of Holley is not interested in humane ways to raise funds for their fire department. Many have reached out to them to offer assistance and yet, they were turned away. We are in the 21st Century with so many options and opportunities to raise awareness and teach children moral and ethical respect for life. To me, this is just insanity on a whole new level", said Joy Benson, who is heading the Halt the Holley Fire Department Squirrel Slaughter campaign on Facebook, makes an interesting point.

It's ironic how whenever there's a massacre like Newtown we are all outraged and wonder how something like that can happen.

Yet, we give children guns and tell them they will be rewarded with more guns for blasting as many innocent squirrels as possible.

The fact that it's a fire department holding this event makes it all the more disgusting, especially in light of the West Webster, NY Fire Department tragedy less than two months ago.


Update: Rochester, NY Democrat and Chronicle newspaper reporter David Andreatta is tagging along with a father and son team as they kill innocent squirrels.

LET YOUR VOICE BE HEARD! CALL THE HOLLEY, NY FIRE DEPT. AND THE MAYOR!