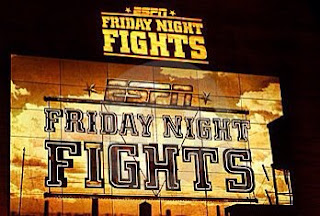 The show will be the second time the Upstate, NY resort hosts the popular Friday Night Fights since ESPN's last show there on January 25th.

Turning Stone's first boxing event was on September 1, 2012, when HBO Boxing After Dark, received such a good response, that they returned less than two months later, on October 27th.

In what has been one of the best fights I have ever seen on ESPN, Brian Vera and Sergiy Dzinziruk put on an action packed fight, which began with Vera knocking Dzinziruk down twice in the 1st round.

Throughout the fight, Dziniziruk took a vicious beating from Vera, who landed strong blows, blooding Dzinziruk.

However, Dziniziruk held on, and in fact, in the 8th round, Dzinziruk briefly turned things around, as he cut Vera, and landing some strong blows of his own, knocking Vera down in the 9th round.

In the 10th round, Brian Vera came back, landing a barrage of powerful blows to Dzinziruk, knocking him down, and forcing the Dzinziruk
to shake his head 'no more', as he clearly had nothing left.

The co-feature bout will be for the WBO Latino Light Heavyweight title, and will feature unbeaten Jackson Junior (14-0-0, 12 KOs) of Sao Paulo, Brazil who will defend his title against Cuban-born Umberto Savigne (10-1-0, 7 KOs) in a 10 round bout.

It will be Jackson Junior's second time at Turning Stone, since making his American debut at ESPN's January 25th show, where he scored
a first round knockout victory over Dante Craig.

Savigne also won a gold medal for Cuba at the 1999 Pan American Games.

Promoter Greg Cohen said, “We couldn't be more excited to be coming back to Turning Stone March 29. Our ESPN event January 25 was a huge success, with incredible action inside the ring. Anyone who has attended the recent televised boxing events at Turning Stone can clearly see the momentum is building rapidly. There is a huge appetite for big time boxing in Central New York and Turning Stone is delivering exactly what the public is demanding.”

I caught up with Oneida Nation Media Liasion Mr. Brett Stagnitti, who took time out of his busy schedule to share his thoughts on what having professional boxing at Turning Stone means to boxing fans.

Hosting televised professional boxing is a great way to showcase the region and Turning Stone Resort as a sports and entertainment destination.


What sort of preparations go into planning a show like HBO Boxing After Dark or ESPN?

The process begins months before the show date, as the promoters, television network, Turning Stone and the Oneida Nation Athletic Commission work together on all the logistics. When fight week comes, the boxers come to town and go through medical exams to obtain their licensing, and the network arrives to set up inside and outside the Event Center to prepare the venue for a live national telecast. The day before the fights, a news conference is held with the boxers, trainers and promoters, and the athletic commission oversees the official weigh-ins. The excitement really builds in those final 24 hours before the fights.


Any plans of HBO Boxing returning to Turning Stone?

Nationally televised boxing events are highly sought after in the sports business, and Turning Stone will continue to seek out the best events to host at the Event Center.


What can boxing fans look forward to in the coming months when it comes to boxing at Turning Stone?

Turning Stone is continually in discussions with the top boxing promoters in the world about the opportunity to host future championship boxing events. As the saying goes, stay tuned!