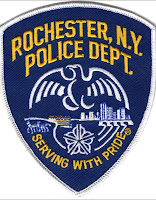 Mary Narvaez was looking for her daughter Lucille, outside Grotto Nightclub in Rochester, New York's East End district early Sunday morning, March 10, 2013, when she noticed a group fighting in the parking lot across from the club where she had parked.

As Mary went to go towards her car, a Rochester, NY Police officer was yelling "You have to get in your cars and get the fuck out of here!", at people who were also walking to their cars.

Mary told the officer she could not leave, as she was waiting for her daughter.

"I don't give a fuck!", the officer yelled at Mary.

At that moment, Mary's daughter Lucille was walking over when Rochester, NY Police officer Mitchell turned around and assaulted Mary.

"He grabbed me full force and threw me on the pavement, the first thing to hit the pavement was my head", said Mary, as she showed me a lump on the back of her head, and other bruises and abrasions she suffered in the unprovoked attack by officer Mitchell.

"I got up off the pavement and I was dazed, then several officers yanked me and they arrested me", said Mary, adding "I asked hem what did I do, and they said I was being arrested for obstruction."

Mary was taken to the Monroe County Jail where she was held on $500 bail.

"The whole thing was traumatizing for me as I didn't know how my daughter was going to get home", said Mary.

Mary was released Sunday afternoon and appeared before Rochester City Court Judge Ellen Yacknin Monday morning, where for the first time since being assaulted by officer Mitchell, Mary learned why she was arrested.

According to the arrest report read in court by Judge Yacknin, Rochester Police officers state that Mary 'touched' two officers.

As is common practice with the Rochester, NY Police department, after assaulting innocent people, they have to charge them with something in order to justify heir illegal actions.

The most common charges police throughout the U.S. use, are resisting arrest, and obstructing governmental administration, or 'O.G.A.', both Class A Misdemeanors.

This is at least the second incident where Rochester, NY Police officers have assaulted a woman in less than four days.

This past weekend I broke the story about Kristen Walker, the Rochester woman and National Guard member who was pulled over with her boyfriend by RPD officers.

Walker, who was raped in 2007, complained to officers who twisted her arm, slammed her head on a police cruiser's trunk, and handcuffed her.

She told the officers that she suffered from PTSD as a result of the rape, and officers laughed at her.

Link to that story: