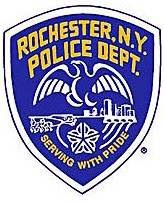 The youth in Rochester's South Plymouth Avenue neighborhood call her "ma", said Gwen, when she called me late last night to tell me about a very disturbing incident involving a Rochester, NY Police officer, and a young man.

"I normally don't go out too late, but I did tonight. As I was returning home from a trip to Wal-Mart, a couple of young men came over to me and told me an RPD officer spit on one one of them. The young man pointed the officer out and I walked over to where the officer was, sitting in his car, and I saw his name, it was Ortiz, and the car was W-58", she said.

While the woman said she was not clear on how the incident originated, she did express concern that RPD officers seem to be engaging in more and more unprofessional conduct.

The incident occurred just blocks away from where Benny Warr, a 52 year old disabled, one-legged amputee was assaulted by Rochester Police officers as he waited for city bus near the intersection of Jefferson Ave. and Bartlett St.

That incident was caught on video, and is going viral on the Internet, once again, putting the Rochester, NY Police department, and the City of Rochester under an international spotlight, one which the RPD can't seem to stay out of, thanks to rogue officers.

After I got off the phone with Gwen, I placed a call to 911 and asked for a supervisor from RPD west side to return my call.

Approximately 15 minutes later, Rochester, NY Police Sgt. Zimmerman called me back, and I described to him the conversation I had with the woman.

I asked Sgt. Zimmerman if officer Ortiz was in fact on duty, and driving RPD cruiser W-58.

Sgt. Zimmerman, who was very professional, and courteous, told me he would have to check, and that he would call me back.

A short time later, Sgt. Zimmerman, keeping his word, called me back, and confirmed that indeed, officer Ortiz was on duty at the time of the incident, and was driving cruiser W-58.

Sgt. Zimmerman said he was not too familiar with officer Ortiz, and wasn't sure of his first name, but said it was R. Ortiz.

A check with the City of Rochester payroll information for Rochester Police officers shows that there is a Richard Ortiz employed by the RPD.

Meanwhile, the young man, is afraid of commenting due to retaliation by Rochester Police.