As Monroe County, NY Sheriff officials prevented employees from nearby businesses from going home to their families until they were questioned as to what they saw, which sounds to me like they may have been worried as to what any witnesses may have observed, mainstream news reporters waited in the cold at a parking lot across the street from the scene.

At one point a Plaza security guard asked reporters to move their news trucks and leave the premises.

As Vincenzo Zagari was rushed into surgery at Strong Memorial Hospital, some news reporters were disturbed by the way that Monroe County, NY Sheriff Patrick O'Flynn dodged them, refusing to give any information or details. 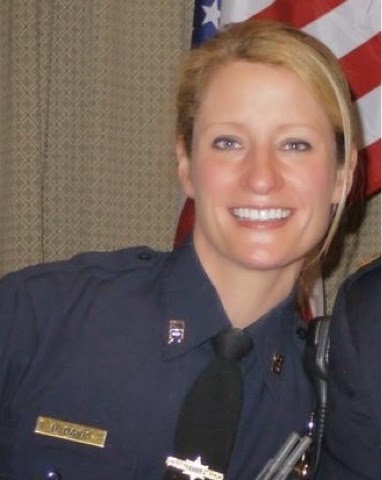 Monroe County, NY Sheriff's Deputy Bridget Davis
In fact, some took to twitter to express their frustration at Sheriff O'Flynn's lack of transparency.

"Not looking like Monroe Co Sheriff will be addressing questions on camera re: Pittsford deputy-involved shooting. Raises questions IMO"

"IMO" is short text for "In my opinion."

Carroll fired off several more tweets, including this one:

"Certainly reasonable to expect that public servants come out & explain to community what's going on in a situation like this."

Finally, several hours later, after making sure that their stories all matched, Sheriff O'Flynn, flanked by other high ranking department officials vaguely answered the media's questions.

Monroe County, NY Sheriff Patrick O'Flynn, in full damage control spin move, said that his deputies responded to a call for a shoplifter at the Wegmans Food Market in Pittsford Plaza around 3:30 pm Wednesday afternoon.

According to O'Flynn the shoplifting suspect fled in a vehicle, crashed with another vehicle, then ran behind M&T Bank.

O'Flynn said the man then displayed a weapon, which is when the female deputy shot the man in the chest.

Interestingly, Sheriff O'Flynn refused to say what that weapon was.

Then, with the investigation into the shooting by one of his deputies near a crowded McDonald's with young children inside, just beginning, Sheriff O'Flynn said that Deputy Bridget Davis has a "stellar record", and that she would not be placed on any administrative duty, something law enforcement agencies typically do, especially after an officer-involved shooting, at least pending the investigation results.

O'Flynn led a cover up by his department in 2012, in a controversial case where a Penfield, NY man's dog and best friend was executed by Monroe County, NY Sheriff deputies Matt Clancy and Sean LeClair.

O'Flynn and the deputies lied, saying that deputies used their department-issued service firearm to stop the dog who they claimed was charging at them.

However, a necropsy performed at Cornell University found that a 9 mm gun was used, which is not the standard issue firearm for the Monroe County, NY Sheriff's Office.

The necropsy also showed that deputies lied when they said the family fog was close to them when they fired, showing in fact that Diablo was much further away, and retreating, not charging.

Given a clear choice of lying for his deputy after she opens fire in Pittsford, NY, in a white, affluent neighborhood, just feet away from young children eating inside a McDonald's, or admitting she was trigger-happy and panicked, Patrick O'Flynn WOULD LIE.

Patrick O'Flynn has LIED BEFORE.

While Vincenzo Zagari fights for his life, with what doctors are saying a 20 to 30% chance of surviving, Monroe County, NY Sheriff Patrick O'Flynn wasted no time in once again calling the actions of his deputy, who has been identified as Bridget Davis, a 12-year veteran of the department, justified.


Please support the work I do by making a donation.