Rochester, NY Police officer Blinds me and my Children with Cruiser's Spotlight, Causes Two Car Crash, then Speeds Off 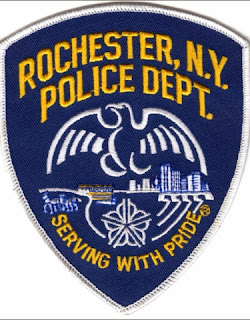 While waiting at a red light at the intersection of Buffalo Rd. and Glide St, a Rochester, NY Police west division officer, stopped at the same red light but heading in the opposite direction as me, turned on his cruiser's spotlight, pointed it directly at my vehicle, blinding me and my family, including my 2 sons, my 4-year old daughter and my niece.

It all happened around 7:15 pm, Thursday evening, as I was returning from taking my son and niece to dance class.

Not knowing why the RPD officer was blinding me and my family with his spotlight, which he kept on us even after the traffic light had turned green, I stood still, not moving forward.

Like I always tell people, when coming into any contact with law enforcement, whether it's being pulled over, questioned, or in this case, having a huge floodlight shone right at me and my family, the important thing is to remain calm.

NEVER give a law enforcement officer ANY reason to think that you are trying to evade him or her, or have anything to hide.

Then I heard a loud crashing sound directly behind me.

A car had been hit in the rear end by another car.

At that same moment, the RPD officer sped away, not even stopping to see if anyone was injured.

I pulled my vehicle to the side of the road, at which time both of the other drivers had gotten out of their cars.

Both drivers, a middle aged woman, and man, almost in unison, asked me the same question.

"Why did he shine the light on you like that?"

"And he just kept on going," said the man.

A few minutes later another Rochester Police cruiser who happened to be driving by, stopped and turned on his emergency lights.

That officer was RPD Sgt. Bello.

Sgt. Bello came up to me and asked me what happened.

He asked me for my name.

"I'm familiar with your work."

I explained to him that an officer blinded me with the spotlight and not knowing why, or what was going on I remained standing.

I asked Sgt. Bello if he knew who that officer was.

Sgt. Bello said he did not.

I gave Sgt. Bello my card and told him I wanted the officer's name.

I told Sgt. Bello that the officer's actions were reckless.

Not only did the officer's unwarranted, and obvious unnecessary actions shining a spotlight on me and my children, cause me to remain standing and not proceed, as I thought I was being stopped, but then for the officer, a first responder, to have left the scene of a motor vehicle accident, something me or you would be charged for, was completely irresponsible and unprofessional.

Sgt. Bello then looked at me and said, " I don't know why the officer did that, I will ask around and see if anyone raises their hand and admits it was them."

Sgt. Bello told me I was free to go.

I got in my vehicle and told my frightened children that everything was ok.