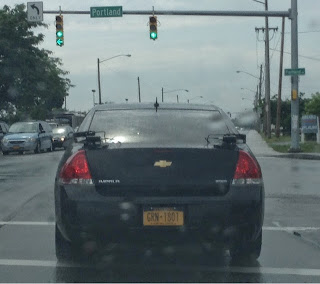 A man, who follows my blog contacted me Thursday on the condition that I not publish his name for fear of retaliation by police.

"I'm at a red light with my child in the back seat, and all of a sudden I see this black car with tinted windows, on my right side, speeding up only to come to a hard stop on the wet road and wait for the same red light I was at," the man said to me.

"At first I didn't know who it was, it wasn't until the light changed, that I saw the radar looking equipment mounted on the trunk of the car, and the small antenna, that I realized it was a police car."

That equipment the man referred to, seen on the photos to the right, which he took, are automatic license plate readers, or 'ALPR's', mounted on the trunk of a black Chevy Impala, plate GRN1801.

Whether mounted on police cruisers, road signs, traffic devices, and bridges, ALPR's use high speed cameras that can photograph thousands of license plates a minute.

The information that the ALPR's capture, including motorists' license plate numbers, as well as date, time, and location of each plate scan, is being collected, and pooled into regional sharing systems.

The end result gives a whole new meaning to big brother is watching you.

Databases full of innocent motorists' information are growing at a fast rate, and usually kept for years, with basically nothing protecting citizens privacy rights.

And what about that unmarked Chevy Impala?

Well here's what the man told me.

"As soon as that traffic light changed, the car takes off, then cuts off several cars, switching lanes without signaling, and driving very reckless," said the man, adding, "Then it would slow down, then speed up again, bobbing in and out of traffic."

"It was very strange, I could see the other drivers brake lights coming on, as he Impala sped from lane to another, then slowed down, and then sped up again, the whole time driving as if it was a scene out of some movie,"

"It was weird, it wasn't like it was going to an emergency, it never turned on any siren, or lights, it was just driving wild all over the place."