Did Virginia State Trooper Johnson, Badge 1145 Threaten Me In Front of My Family After Unconstitutional Traffic Stop?

What's worse than being pulled over by police for no reason?

Being pulled over by police for no reason while on a 1,500 mile road trip with your family, and having the officer lie to you about why he pulled you over for in the first place, then having that same officer make a veiled threat against you, in front of your children.

That's exactly what happened to me, last Tuesday, while traveling to Miami with my sons and my niece, to visit my 86-year old aunt.

As we were driving through Virginia, heading south on Interstate 77, I passed two unmarked law enforcement vehicles, which were parked in the median.

With my rental vehicle's cruise control set at 62 miles per hour, in a 65 MPH zone, I didn't think I'd have anything to worry about as I passed the unmarked cruisers.

One of the cruisers pulled out from the median as soon as I drove by them. 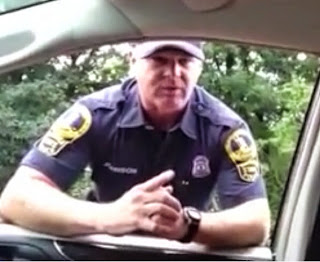 The unmarked cruiser, a black Chevy Impala, then sped up, followed me for at least a mile, then got on my driver's side, and pulled up right next to my driver's door window.

Perhaps some of you who have traveled out of state will recognize this very common law enforcement tactic, where police target out of state motorists (in this case, my rental had a Florida tag, traveling through Virginia), and police will then follow your vehicle, usually remaining either directly behind you, or just behind your left rear side, or what I call you '8 o'clock position.'

Law enforcement officers will then continue to follow you for some time, while unbeknownst to you, they may be running a check on your license plate via their on board computer, or they may just be waiting to see if you commit any infraction for them to have a valid reason to pull your over, or as in the case of Trooper Johnson, they may just pull you over for no reason, then lie, in what is commonly referred to as 'fishing', hoping that they will get lucky and that their unlawful, unconstitutional traffic stop will yield them something to ticket you for, or charge you with.

As always, my recommendation is RECORD EVERYTHING.

That's when the officer, visibly angry, pointed, motioning with his hand, for me to pull over.

Not knowing what I had done wrong, as I knew I was not, and had not been speeding, I threw my hand up, as if to say "For what?"

The officer clearly did not appreciate the fact that I was questioning his angry directive for me to halt.

And his actions clearly indicated this.

As I decelerated, and turned on my blinker to pull off to the shoulder of the busy highway, his face grew red, as he shouted the words, "Pull over now!"

As soon as I inform Virginia State Trooper Johnson, badge #1145 that I will be video recording the entire interaction, he attempts to justify his illegal traffic stop by lying about the reason why he pulled me over.

"Impeding the flow of traffic," Trooper Johnson tells me after I ask him why he stopped me.

I won't break down the video, or Trooper Johnson's irate conduct, as you can see that for yourself, but what I will do is address what's perhaps the most disturbing part of the entire incident, other than the fact that trooper Johnson illegally stopped me, for no reason, then lied in order to justify his unlawful stop.

At the :59 second mark of Part 2 of the video, in what I took as a 'watch your back' threat, Virginia State Trooper Johnson stares me down, points at me, and in an eerie, low voice tone tells me, "You be careful," while giving my 13-year old niece a quick, cold stare.

(Check the video, and pay close attention
to Trooper Johnson's body language, including
his facial expressions, as well as the way he
tells me to be careful.)

Of course, Trooper Johnson, who admits to me on video that he gets "paid to look at people", tries his best to change the subject when I immediately call him back and ask him what he meant by his "You be careful" statement.

"What type of activist are you?", Trooper Johnson asks me.

What type of activist am I Trooper Johnson?

I'm the type of activist who knows when a law enforcement officer (YOU) has conducted an unconstitutional traffic stop.

I'm the type of activist who is smart enough to video record the entire interaction with said officer, (YOU), so I can document when that officer, (YOU) lies, in order to try and justify an unlawful traffic stop, as well as threaten a citizen, before boasting how many of YOUR fellow officers are posted up down the interstate.

Trooper Johnson, that's the type of activist I am.

The type of activist who always encourages citizens to record EVERY interaction with police, because just like you did Trooper Johnson, COPS LIE.

Which is why I always remind people... COPS LIE. RECORD EVERYTHING.

Perhaps some of you who have traveled out of state will recognize what Virginia State Trooper Johnson did, as a very common law enforcement tactic, one in which police target out of state motorists (in this case, my rental had a Florida tag, traveling through Virginia), then follow the vehicle, usually remaining either directly behind it, or just behind it to the left rear side, what I call your '8 o'clock position.'

Law enforcement officers will then continue to follow the out of state vehicle for some time, while unbeknownst to the motorist, the officer may be running a check of the vehicle's license plate via their on board computer, or they may just be waiting to see if the motorist commits any infraction, which will then give the officer a valid reason to pull the motorist over.

Of course, the officer can simply pull you over for absolutely no reason at all, other than because he or she simply can, which is what Trooper Johnson did.

And as Trooper Johnson did, the officer will then lie in order to justify the illegal stop.

This is commonly referred to as 'fishing'.

By 'fishing', the officer hopes that they will get lucky and that their unlawful, unconstitutional traffic stop will yield them something to ticket you for, or charge you with.

In this case, the only thing Virginia State Trooper Johnson's unconstitutional traffic stop yielded was a veteran activist who records, and live streams ANY AND EVERY interaction with law enforcement.