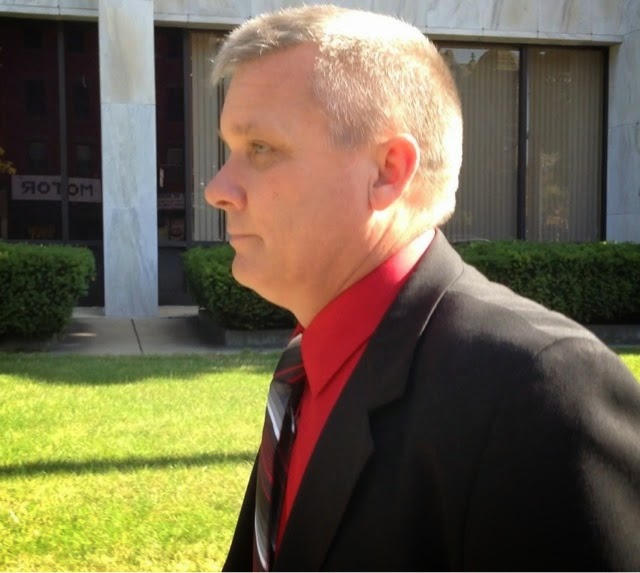 Former Greece, NY Cop John Casey III leaves Federal Court
UPDATED MARCH 27, 2015
By Davy V.
Former Greece, NY Police officer John Casey pleaded guilty Friday in U.S. Federal court, to posessing child pornography.
Casey faces up to 20 years in prison when he is sentenced in May.
Below is my original story when Casey was charged in September 2014, including a video from when I confronted him after his arraignment.

This disturbing story involving a former law enforcement officer is another reminder of the type of sick, disturbed individuals who have the public's trust to protect and serve men, women, and children.

A criminal complaint which was unsealed in federal court Tuesday, accuses Casey of posessing child pornography, and sharing images online.

Casey, who resigned from the Greece Police department in May, is accused of posessing at least 64 child pornography files, with images depicting minors involved in sexual acts.

One of the images which Casey possessed featured a male adult sexually violating female infant.

It wasn't until two years later, in March of 2014, that a federal agent who was investigating different peer-to-peer file sharing services, discovered an IP address whose user had the 64 child pornography files which were ready for download.

The IP address, his own.

Agents also took a second computer from the home, which according to federal officials, contained information that could be traced back to Casey.

Investigators also discovered information on that computer which was traced back to officer Casey's profession as a police officer for the Greece, NY Police department.

He will appear before Federal Magistrate Jonathan W. Feldman in downtown Rochester on Monday.

Update:
Former Greece, NY Police officer John Casey III appeared in Federal court Monday morning, where he pled not guilty to charges of posessing child pornography images.
Standing before U.S. Federal Magistrate Jonathan Feldman, Casey who was a Rochester, NY Police officer before being hired by the Greece Police Department, denied that the images, which include a female infant being sexually assaulted by an adult male, were his.
"He's accused of possessing some images alleged to be of children, sexually pornographic images of children," said Casey's attorney, Stephen Leonardo, adding, "He did deny that those are his."
Casey is due back in court in November.
Check out the video below of me asking former Greece, NY Police officer John Casey III if he had any comment after being arraigned in Federal court.