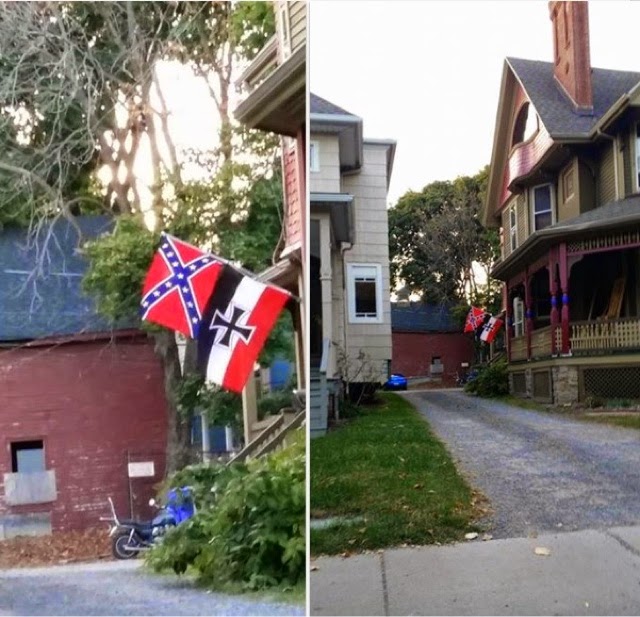 A confederate flag and a German Reichskriegsflagge flag
hang at 287 Meigs Street, in Rochesrer, NY

At first, 287 Meigs Street looks like any other house in Rochester, NY's Park Avenue neighborhood, just a few blocks away from the City's annual Park Avenue Arts Festival, one of the biggest festivals in Upsate New York.

But one look down the home's driveway, at the rear of the house will reveal something disturbing.

A confederate flag hanging alongside a German reich battle flag, used in the 1930's.

And it's the combination of those flags which has sparked quite a buzz on social media.

Here's how it all started.

A woman, who had been looking for an apartment to rent, found one she fell in love with on Meigs Street.

Until she saw photos a friend of hers had posted on Facebook, which showed the flags that her potential soon to be neighbors had hanging from their home.

The woman then took to Facebook to vent her disappointment, and frustration.

And it's become a heated topic, with more than 290 comments on the original post, in less than 24 hours.

The comments range from some folks claiming the flags are proof of a presence of Neo-Nazi groups in Rochester, to some people who are just disgusted at what they feel is an obvious racist message whoever hung the flags is trying to send, and there are some who are defending the flags as nothing than more than free speech.

Perhaps the following comment posted on the Facebook thread, best sums up the obvious meaning behind the flags hanging at 287 Meigs Street.

"Pairing the Confederate Battle Flag with the Reichskriegsflagge is clearly barely coded identification with white supremacy. Neonazis in Germany march under variations of the black-white-red tri-color Reichskriegsflagge since the swastika is banned.  If someone wanted to show German pride and indicate they weren't a nazi, they'd use the Bundes- und Handelsflagge black-red-gold tri-color."

"It may be that this old imperial symbol is now finding favor with neo-nazis of some kind. The key symbol here, in any case, is the Stars and Bars. We need a variation of "No pasaran," something like "It shall not fly." I wonder, too, if the motorcycle parked in the background has any connection to the fascistic flag display. I'm not dumping on motorcycles as such; I'm just wondering if there's some kind of "road warrior" gang thing going on."

Phillip J. Seitzer, who is of German decsent, pulled no punches in expressing his disgust after learning about the flags on Meigs Street.

"These stupid ass racist fucks need to make their own flags and symbols and stop making a mockery of my heritage! Yes, it's the symbolism of a bad time in German history but that's why it shouldn't be thrown around and have our one bad time in my people's history have pride taken from it."

Seitzer added, "The vast majority of my people have gotten past that black mark of my ancestors and are caring people so these scumbags need to leave this lame Hitler shit alone!"

Judging by the buzz that the flags at 287 Meigs Street have received on social media, it's obvious that this is a hot button issue.

Are there Neo-Nazis living on Meigs Street?

Is there a Neo-Nazi gang in Rochester's Park Avenue neighborhood?

But I want to be clear, whoever lives at 287 Meigs Street has every right to hang those flags and express themselves.

Just as YOU or I, they too have a right to free speech.

The first amendment guarantees them that right.

Now, with that being said, just because someone has a right to free speech doesn't mean that I won't excercise my right to expose them, and any sick, disgusting. disturbed, and hatred filled message they may be trying to send.
Note: If you enjoy reading this blog, or even if it's your first time stopping through, please consider supporting my activism and my film 'A Promise to My Dad', by making a donation.
To make a donation, look for the 'Donate' button on the top right of the page.
All transactions are secure and go through Paypal.
Thank you.