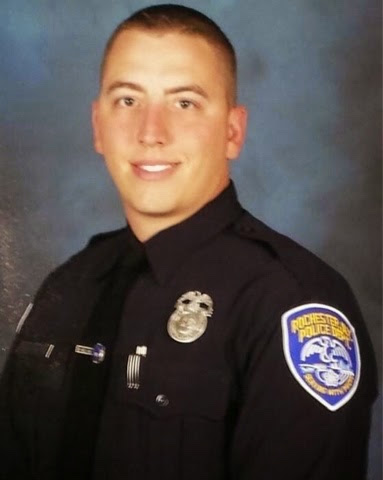 Within just a few hours, City of Rochester officials, including Mayor Lovely Warren, and City Councilman Adam McFadden lauded Pierson as nothing short of a martyr, who according to them, laid his life for down the community.

Denouncing Pierson's killing, Rochester City Councilman Adam McFadden, a black man, or as many African-Americans in Rochester refer to him as, a "House Negro" who has NEVER denounced senseless killings of innocent blacks and Latinos, by white, trigger-happy Rochester, NY cops, went as far as getting in front of television news cameras and showed just what a sellout he truly is, when he said that Rochester's minority community should be outraged with Pierson's killing.

In my September 7th piece, "Rochester, NY Police officer Daryl Pierson Is No Hero", I pointed out that the Tactical Unit, is a division of the RPD known for having some of the most dirty, rogue, abusive cops, who regularly engage in racial profiling, illegal searches, warrantless home invasions, abuse, shakedowns, beatings, and who routinely violate innocent, unsuspecting minorities' civil rights.

Daryl Pierson was part of this GANG.

He was no different.

And Yaneek Brown knows this firsthand.

After undergoing gastric bypass surgery on December 23, 2011, and having spent almost a week in the hospital before being released, Yaneek developed complications from the surgery.

On January 9, 2012, her doctor ordered her to go to the emergency department at Rochester General Hospital  to have a CT scan done.

Soon after arriving at the hospital, Yaneek Brown would become the latest victim of police brutality, at the hands of yet another rogue Rochester, NY cop.

"It happened right in front of the parking garage window," Yaneek recalls.

"They (parking staff) called the police after I wasn't able to pay the $3.00 parking fee."

"He (officer Pierson) had an aggressive attitude when he came into my presence," Yaneek told me.

"I tried to be as polite as I possibly could under the circumstances, I had just had major surgery and I was having complications, which is why my doctor told me to go get an emergency CT scan."

Yaneek tried to talk to officer Daryl Pierson, but it was clear he wasn't interested in listening to her.

And that's when Pierson snapped.

"Officer Pierson grabbed me and tried to throw me on the ground," Yaneek said.

"Then he kicked me, punched me, and pepper sprayed me like I was nobody."

"I remember officer Pierson telling me that he would make me lose everything."

Yaneek was then handcuffed and taken to jail, where she was treated for her injuries.

She was charged with theft of services and resisting arrest.

Although the theft of services charge was dismissed, she was found guilty of resisting arrest.

Not surprisingly, after conducting their own "investigation", the Rochester, NY Police Department's Professional Standards Section, (PSS) sent Yaneek Brown a letter stating that after concluding their "investigation" they decided that her claims were "exonerated" and "unprovable".
(YOU CAN READ THE LETTER BELOW.) 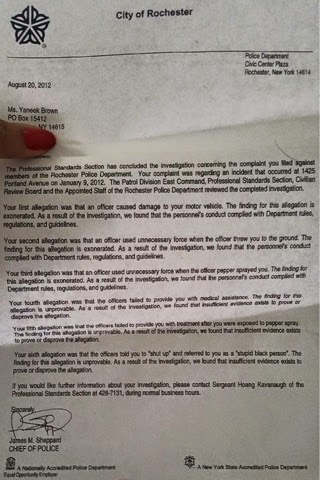 Another way of saying it never happened.
The letter is dated August 20, 2012.
Basically, the Rochester, NY Police Department took more than seven months to tell a black woman
who was beaten by a white cop that it never happened.

So what was the RPD Professional Standard Section's explanation for that?
"An investigator with the Rochester, NY Police department also told me that the video footage from the surveillance cameras in the hospital's parking garage was accidentally deleted," said Yaneek.