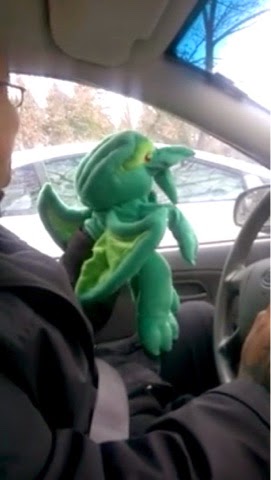 The Firefighter Code of Ethics outlines several straightforward rules of conduct
that firefighters must abide by, both on, and off duty.

In a disgusting, and disturbing video, posted by Joel's brother, Omar Ramirez, on his
facebook page, the Rochester Fire Department recruit is seen driving, while holding
a green puppet in one hand.

It's what he says.

The video begins with Joel Ramirez stopped at a light, on Monroe Avenue, in
Brighton, NY, a suburb of Rochester.

Ramirez then looks over to his left, at a vehicle, and says
"Well hello there!, I'm driving."

Omar Ramirez, who is sitting in the passenger seat, recording the video,
is heard laughing.

"We're in the Jew territory, I forgot," Omar Ramirez is heard telling Joel.

To which Joel Ramirez replies, "Say what?"

"We're in the orthodox Jewish territory over here," Omar replies.

"Fucking Jews!", Joel Ramirez says, as his brother is heard laughing in
the background.

Sunday morning at 9:25 a.m., I received a tip from someone who identified themselves as
a City of Rochester, NY firefighter.

The email from the individual, who asked to remain anonymous, reads as follows;

"Hi, I have a video you might find interesting of a recruit RFD Firefighter who is
currently enrolled in this year's Fire Academy. The firefighter's name is Joel Ramirez,
he is the one driving with the puppet on his hand. His brother recorded the video
and posted it on Facebook. It's upsetting because as a career firefighter myself, these
types of people in the department do not reflect the majority. Please see attached video.
I think more people should know that our city actually employs this person."

It will be interesting to see what comes of this.

What if anything the City of Rochester will do.

If Rochester's corporate run mainstream news media will even care
to cover this.

As a Latino myself, who has a beautiful niece and nephew who are Jewish,
I found Joel Ramirez' comments to be disgusting.

And to think that this individual will be serving the Rochester community
as a first responder?

I'm at a loss for words.

Unfortunately this is not the first incident of anti-semitism in Brighton, NY.

In 2011 two teens were charged with burning an image of a swastika,
in a Brighton neighborhood.

This sort of behavior should not be tolerated of anyone.

But especially someone in a position of public trust.

I have always had the utmost respect for firefighters and EMT's.

Frankly, Joel Ramirez doesn't deserve to be a part of a special community of
real life heroes who save lives everyday.

Less than 24 hours after I broke this disturbing incident right here on my blog, the City of Rochester fired Joel Ramirez.

James Smith, Director of Communications for the City of Rochester had this to say:
"The actions of the recruit in question did not rise to the high standards set by the Rochester Fire Department, which prompted his termination under the terms of his probationary employment."
After watching the video, Rochester, NY Fire Department Lt. Willie Jackson expressed his thoughts:
"We don't like to see anybody put anyone down. The fire department we go out and help all members of the community, we don't discriminate based on race, sex, religion or anything like that. It kind of hurt," said Rochester Fire Department Lt. Willie Jackson.