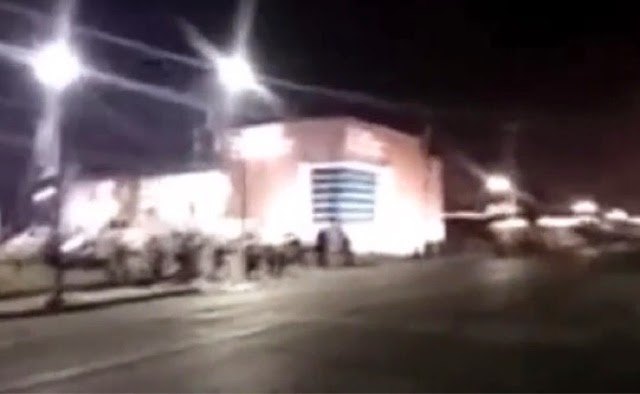 Scene of shooting, Ferguson Police headquarters
By Davy V.
Two St. Louis, Missouri County Police fficers were shot early Thursday morning outside Ferguson, Missouri Police headquarters, as a protest was being held just hours after Ferguson Police Chief Thomas Jackson resigned after a U.S. Department of Justice report revealed widespread corruption within the Ferguson Police Department, including racist emails, racial profiling, and unconstitutional stops, detentions, searches, and arrests of African-Americans.
One of the St. Louis County Police officers was shot in the face, the other in the shoulder.
Both were rushed to the hospital where they are undergoing surgery.
The shooting was captured on video by someone who was Livestreaming the protests.
In the video, several gunshots are heard, as a woman describes police officers drawing their weapons.
After the shots are heard, a man yells, "Acknowlegment nine months ago would have prevented that from happening!"
A clear message to Ferguson Police regarding the shooting death of Michael Brown, by Feguson Police officer Darren Wilson.
Shortly after the shooting, St. Louis County Police Chief Jon Belmar held a press conference in front of the hospital were his officers were rushed to, seemed to blame protesters for the shooting.
"We have seen in law enforcement that this is a very very very dangerous environment for the officers to work in," Belmar said.
And as always, not surpringly, mainstream news media outlets such as CNN spun their news stories, to insinuate, and support Chief Belmar's blaming blaming protesters.
Click link below to watch raw video of shooting
http://youtu.be/baZL7eY37-w
Follow me on twitter
https://twitter.com/davyvara
Posted by Davy V. at 1:35 AM