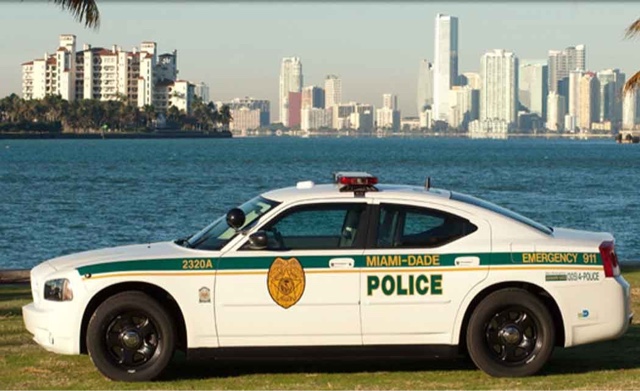 By Davy V.
Integrity.
Respect.
Service.
Fairness.
Those words are displayed on a sign outside the Miami-Dade Police Fred Taylor Headquarters Building in Doral, Floridaa.
But one Miami-Dade Polce Detectve clearly didn't abide by them.
Miami-Dade Police Detectve William Kostopoulos, 47, has been indicted on charges that he abused has authority as a law enforcement officer to violate the civil rights of motorists which he pulled over, then robbed them.
Yes.
Robbed them.
The indictment accuses Kostopoulos of making three traffic stops so that he could rob the motorists of money, and other possessions.
Kostopoulos, a 17-year veteran, is also accused of lying to investigators in an attempt to get away with his crimes.
In a statement at a news conference Thursday, Miami-Dade Police Director J.D. Patterson said the following:
"To effectively carry out our sworn duty to protect the physical safety and the constitutionally granted rights of our residents, law enforcement officers need the trust and confidence of the community. Officers who violate the tenet of this profession negatively impact this necessary bond between the public and the police and make the jobs of the honorable and professional officers more difficult."
Sounds good, right?
Except one thing.
Detectve Kostopoulos is on paid leave.
In other words, a paid vacation.
Follow me on twitter
https://twitter.com/davyvara
Posted by Davy V. at 7:38 PM