COPS LIE. RECORD EVERYTHING: Rochester, NY Police officer Refuses to Give Me Her Badge Number, After Driving Reckless and Tailgating My Vehicle; "It's None Of Your Business!" (VIDEO) 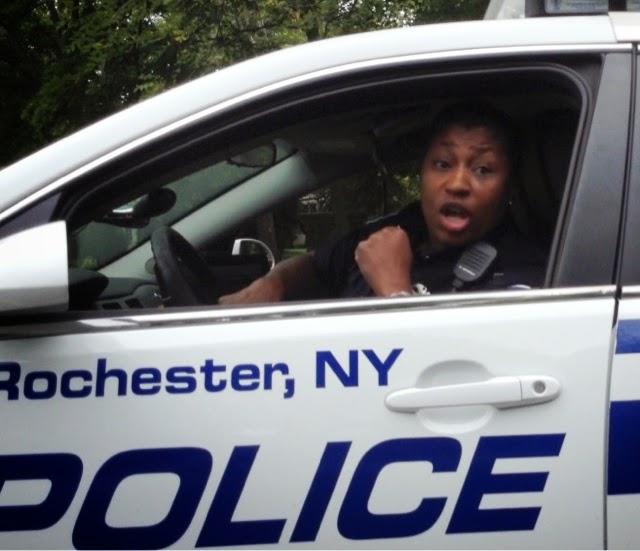 For years I've relentlessly exposed how most members of the Rochester, NY Police Department have an above the law mentality, an arrogant behavior, and a sense of entitlement, as well as a belief that they are somehow exempt from being held accountable by the very same citizens who pay their salary.

In other words, the taxpayers.

Take for example the Rochester Police officer in the video below, who after tailgating me and putting me and my child's safety at risk, refused to give me her badge number despite an obligation as a public servant, to do so.

Thursday afternoon, while driving on Highland Avenue, I notice a Rochester Police cruiser speed up behind me.

Confused as if to the officer was pulling me over, as not only had I not committed any violation, but also seeing no lights flashing on the cruiser, I kept driving, doing the posted speed limit.

The officer then got so close to my rear bumper that at one point I couldn't even see the cruiser's bumper in my rear view mirror.

Not understanding why the officer was right on my ass and why she thnot passing me, as there was no traffic coming in the opposite direction, I decided to just pull over to the side of the road.

That's when in between explaining to one of my children in the backseat that everything was ok, the RPD officer pulls up next to my car and slams her brakes.

The officer then rolled down her window, and yelled at me, "Is everything ok, why did you pull to the side when you saw me behind you?"

"Because you have been tailgating me for a while,"  I replied.

"What is your badge number?" I asked the officer.

"None of your business," she replied, before nervously going into a story about her being n tne way to a burglary, which made no sense because again, up the point where she intentionally sped up, and gotright  pn my bumper, before tailgating me, she was not driving fast, and at no time did she have flashing lights turned on RPD E-64 cruiser.

I asked the officer for her badge number again, and again she replied "None of your business," then drove off.

The only reason that I did not record the interaction is that my child had my ipad and was playing a game on it.

The RPD officer then turned her lights on, only to stop and wait for a red light.

It was at this point where I pulled up next to the officer and again asked her for her badge number.

And this time made sure to video record her unprofessional, above the law behavior, and her refusal to be accountable to a taxpayer by giving me her badge number.

When the video begins, pay close attention to the RPD officer.

Notice how the officer is relaxed, playing with her fingernails.

Does that look like a cop en route to a burglary call?

Notice how she makes up lie as she goes.

"She was supposed to give you her badge number," that's what Rochester, NY Police Sgt. Henry Favor told me, after I called RPD.

As well he should be.