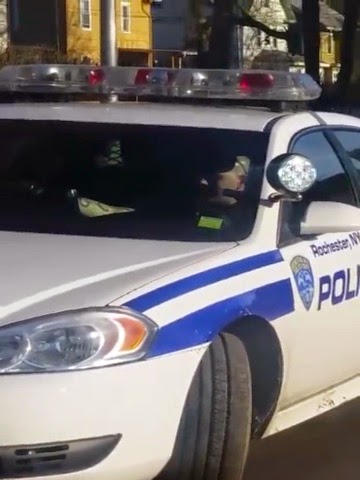 Rochester, NY Police officer sits in his cruiser, while blaring loud siren at young woman video recording.
By Davy V.
A disturbing video taken by a young law student exercising her right to record, a right protected under the first amendment, shows how far the Rochester, NY Police Department will go in order to violate citizen's constitutional rights.
On Wednesday April 15th, the young woman, who goes by the Facebook name Justice Hilll, and out of fear of retaliation by Rochester Police has asked me not to publish her real name, was heading to the Rochester Public library branch located at 310 Arnett Blvd. on Rochester's west side around 6:30 p.m.
When she got to the library, she realized it had closed just minutes earlier.
That's when the young woman saw two Rochester, NY Police cruisers following a group of youths who were walking on the sidewalk across the street.
"They were yelling at the youths and telling them that if they didn't leave, they were going to arrest them," the young woman told me via a telephone interview late Monday night.
She told me that's when one of the RPD officers handcuffed one of the youths and put him in the back of his cruiser.
"That's when I started recording," said the young woman.
"I mean the youths didn't appear to be doing anything wrong, they were just walking," she said.
But here's where the story stops having anything to do about the youths, and becomes about a Rochester, NY Police officer violating a citizen's right to record.
After one of the Rochester Police officers begins to video record the young woman from across the street, the second RPD officer, driving cruiser number 261, drives over to the Arnett Library's public parking lot, drives up on the young woman and turns on his high decibel siren/alarm, in an attempt to intimidate the young woman, and get jet to stop recording.
"I couldn't believe what the officer was doing, I mean that's coercion," the young woman told me.
In the video the RPD officer can be seen just sitting in hs cruiser while he blares the loud siren, but the young woman holds her ground, exercising her first amendment right to record.
I asked her why she took so long to post the video.
"I didn't think that anyone would really care," she said.
I will be updating this piece. 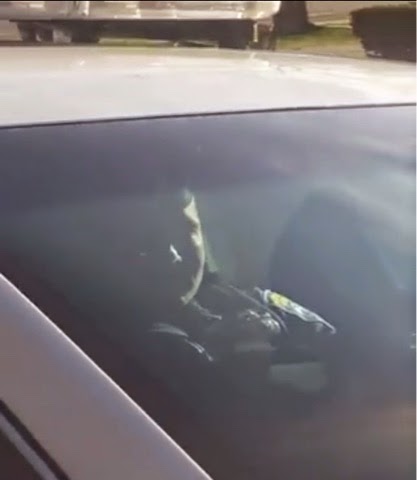 Rochester, NY Police officer stares young woman down as he blares loud siren at her.
Click link below to watch video..
http://youtu.be/W8xLvOFUKBc
PLEASE SUPPORT MY FILM "A PROMISE TO MY DAD"

That's me on the right with my dad Mario Vara, and Judge Provenzano
when my dad became a U.S. citizen.
For the past 20 years my work has centered around exposing police misconduct and corruption.
Most recently, I exposed an Irondequoit, NY Police Detective, Jim Frascati, for posting disturbing racist posts on social media against African-Americans and Mexicans.
As a result of my exposing Detective Frascati right here on this blog, he was fired, and a 911 Deputy Director was suspended without pay after he also posted racist comments on Detective Frascati's original post.
As an activist, my goal is to put a spotlight on incidents which mainstream news media often ignores.
So why do I do this, you may ask?
Well, my story begins as the son of a Cuban immigrant, who left his homeland in search of a better life for his family.
And it's that story, my Dad's story, which I want to tell through my film, "A Promise to My Dad."
But I can't do it alone.
I need your help.
'A Promise To My Dad' is a documentary film about a promise I made to my father at his wake, after my father committed suicide.
The short film explores the life of my dad, Mario Vara  as he leaves Cuba with my mom and older brother in 1968, in search of freedom and a better life for our family.
After moving the family to Rochester, NY, my father realizes that despite the promises of freedom and liberty that a life in America can bring, the harsh reality is that there are many injustices as well.
In fact, my dad would soon face very similar 'police state' tactics, as the ones he escaped his homeland for in the first place.
"A Promise to My Dad" highlights an incident in the 1980's, when Rochester Police officers Mark Mariano and Randall Benjamin kicked down the family's door, illegally entering our home, terrorizing me and my family at gunpoint.
As a result of that incident, my dad becomes outspoken against police abuse and misconduct.
Unlike many Americans who take their rights for granted, my dad took a stand to denounce law enforcement violating U.S. citizen's civil rights.
Having lived a communist dictatorship, my dad knew all too well what it was like to live in a totalitarian police state, where simply expressing one's dislike for Castro and his government could land you in prison.
My dad was passionate in his denouncement of rogue cops abusing and violating citizen's civil rights in the U.S.
As a teen, I would tag  along with my dad accompanying him to community meetings, rallies, and marches where he, along with other citizens demanded accountability from those whose job is to serve and protect, as well as the elected officials whose job it is to keep them in check.
'A Promise To My Dad' features me telling my dad's story, including talking about my father's depression and how it led to him committing suicide in 1993, after the Rochester, NY Police Department targeted my father through a series of selective harassment and intimidation tactics.
'A Promise to My Dad' follows me as I struggle to keep the promise I made to my dad, to continue his work against police misconduct and corruption, while at the same time trying to find my own identity as a young man, then as a father myself.
Throughout the film I will talk about my own struggles with depression, my father's suicide, and the effects that my work has brought to me and my family, including my children being stalked and receiving death threats.
One example of this came in August of 2014, when an ex-con who is known to work with Rochester Police as a paid confidential informant (C.I.) was captured on a store's surveillance video threatening to murder, and decapitate my 5-year old daughter.
Despite the video clearly showing the individual threatening to kill and decapitate an innocent child, Rochester Police and the Monroe County, NY District Attorney's office, including D.A. Sandra Doorley, refused to charge the individual.
Please support my film "A Promise to My Dad" by making a donation.
Making a donation is easy.
Just click on the link below which will take you to my blog.
Once there, click on the 'Donate' icon located at the top right of the page and follow the easy steps.
All donations are secure through PayPal.
Any donation over $35.00 receives a free 'A Promise to My Dad' t-shirt.
Just be sure to include your address when making your donation.
Click link below:
http://davyv.blogspot.com/2013/09/a-promise-to-my-dad-will-tell-my-dads.html
Follow me on twitter
https://twitter.com/davyvara
Posted by Davy V. at 9:10 PM