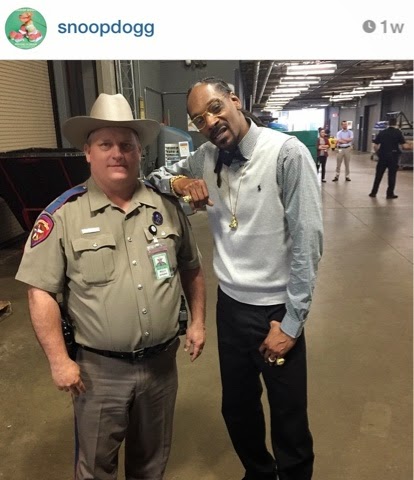 Texas State Trooper Billy Spears with Snoop Dogg
By Davy V.
Last year, Texas State Trooper Billy Spears filed a misconduct complaint against Sgt. Markus Stokke of the Texas Alcohol Beverage Commission (TABC) after Stokke detained the off duty Trooper without probable cause.
But as Spears found out, when a police officer crosses that thin blue line, there'll be hell to pay.
Fast forward to last month.
South by Southwest Music and Film Festival.
Austi, Texas.
Hip Hop Legend Snoop Dogg, the keynote speaker for the 2015 SXSW Festival, sees Texas State Trooper Billy Spears and asks him to take a photo with him.
Trooper Spears obliges.
Snoop's publicist takes the photo, and within minutes, Snoop posts the photo on his Instagram, and blasts it to his 4.5 Million followers with the caption: "Me n my deputy dogg"
Ok, back to Trooper Spears.
It seems as though his fellow law enforcement boys didn't appreciate that Trooper Billy Spears posed for a photo with Snoop Dee-O-Double G.
Either that, or they were just waiting to get back at Spears for his having filed a complaint against an overzealous Sgt. Stokke.
You see, the Texas State Police has reprimanded Trooper Spears for the photo.
According to Texas State Police, they felt that by Spears posing for a photo with "a known criminal" Spears has "Defincincies indicating need for counseling."
The Texas State Police official reprimand of Trooper Spears reads:
"While working a secondary job, Trooper Spearsctook a photo with a public figure who has a well known criminal background including numerous drug charges."
It goes on to read:
"The public figure posted the photo on social media and it reflects poorly on the Agency."
Personally, I see no harm in Trooper Spears taking a photo with a music legend like Snoop Dogg.
Especially being that technically, Trooper Spears was off duty.
What I find extremely disturbing here is the retaliation on behalf of the Texas State Police against  Trooper Spears for his complaint against a fellow cop.
It shows just how deep that whole "thin blue line" thing is.
This Snoop Dogg photo reminds me of an interesting experience I had in 2013 while visiting my adopted hometown of Miami, Florida.
As I turned a corner in a rented Dodge Charger, I accidentally burned a little rubber.
I was pulled over by Coral Gables Florida Police officers.
Of course it didn't help that my rental stood out like a sore thumb with New York plates.
Coral Gables Police officers Ober and Fernandez recognized me, and after letting me off with a "be careful with the lead foot" warning, asked if they could take a photo with me.
Here it is. 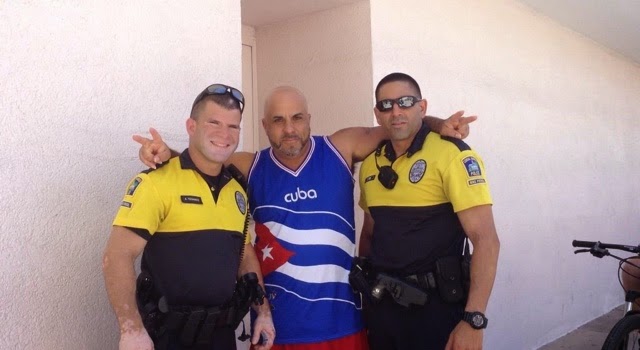 Cool Cops.
Photo of me with Coral Gables, Florida Police officers Fernandez (left) and Ober.
PLEASE SUPPORT MY FILM "A PROMISE TO MY DAD"