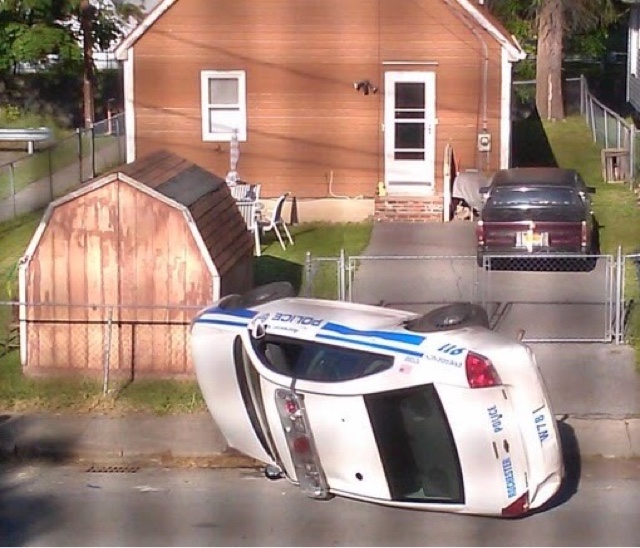 Rochester, NY Police cruiser W-78 after it flipped over on Delamo Street.
By Davy V.
On April 25, 2013, a Rochester, NY Police officer, driving reckless, at a high rate of speed in the residential neighborhood of Hudson Avenue and Durnan Street, crashed into a family's vehicle.
Inside the car, an infant.
"The officer did not have the lights or siren on but he turned them on right after the crash", said a man who only identified himself as the owner of Ricky's World, a clothing store located in a small plaza where RPD cruiser, E-34, came to rest after smashing into the family's car.
"They're scared, they're feared, they're nervous of what the police can do because they've been doing a lot of stuff to a lot of people in the neighborhood and no one wants to speak up", a woman told me.
Just a few minutes after I spoke with the woman, an unmarked Chevy Impala pulled up in front of Durnan Market, on Hudson Avenue, and a Rochester, NY Police internal affairs official entered the store, demanding the store's video surveillance tape. 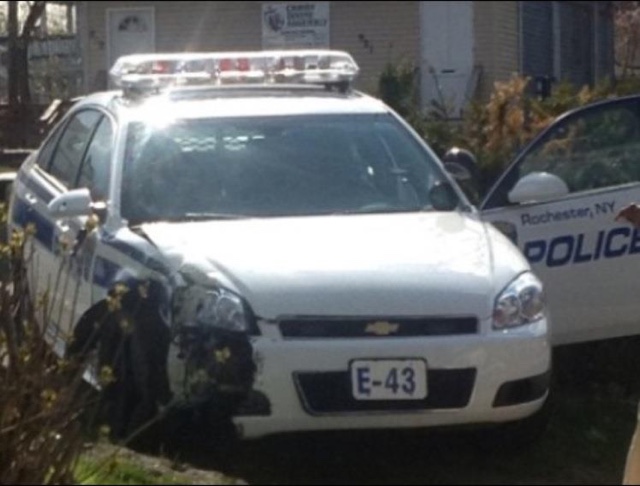 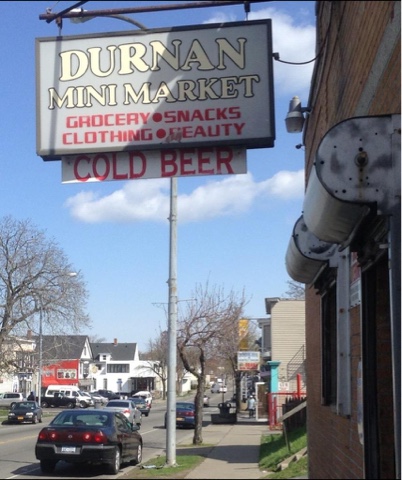 Unmarked Rochester, NY Police car outside Durnan Market
after RPD cruiser crashes into family's car carrying infant.
Two months later, in June of 2013, neighbors on Westfield Street, in Rochester's 19th Ward neighborhood were awakened around 5 a.m. by what they described as a "huge bang."
One neighbor, a woman who took the photos below, said that when she went outside she saw a Rochester Police officer bleeding from the back of his head.
It appeared that the officer had fallen asleep behind the wheel and crashed into a legally parked car. 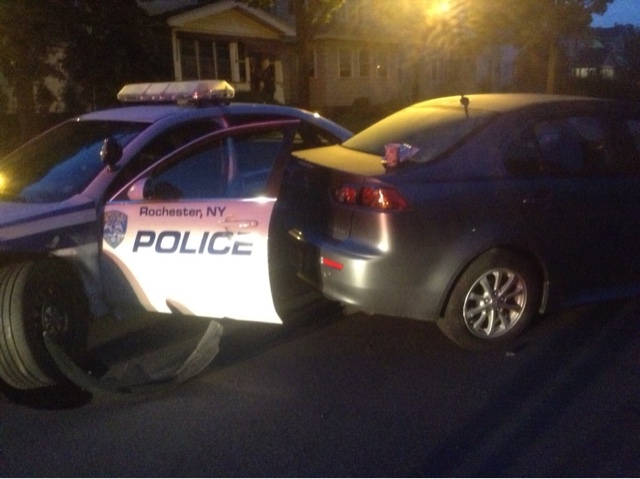 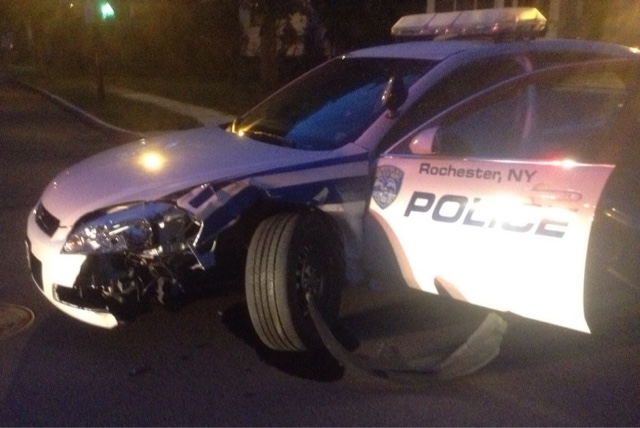 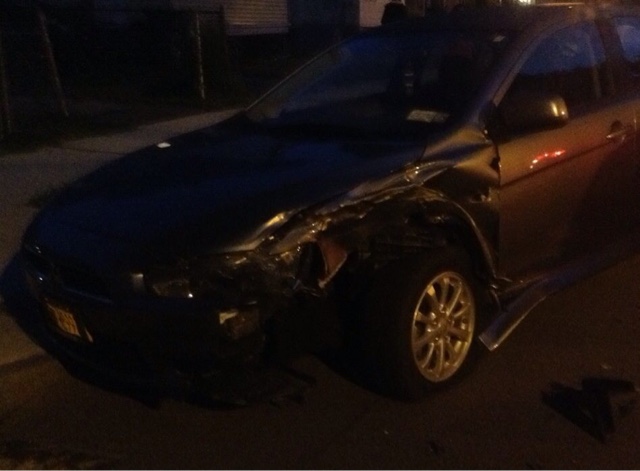 Legally parked vehicle after Rochester, NY Police car crashes into it.
And just three months later, on September 23, 2013, a Rochester, NY Police officer driving the wrong way on Campbell Street, a one-way street on Rochester's west side, crashed into a vehicle with three passengers inside, sending all three to the hospital with injuries.
"That police car must have been doing seventy miles an hour going the wrong way up Campbell," a witness standing on the corner of Campbell and Grape Steets, who didn't want to identify himself out of fear of retaliation by the RPD told me.
"They don't care, they will somehow cover it all up and blame the driver who was doing nothing wrong." 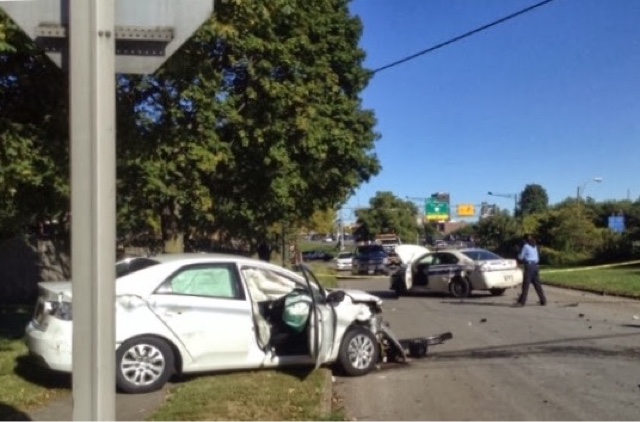 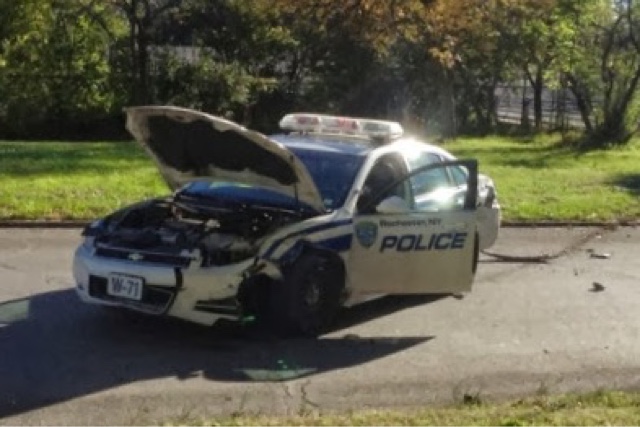 Rochester, NY Police cruiser W-71 after crashing into vehicle.
Photo by Davy V.
On June 1, 2014, a Rochester, NY Police officer driving cruiser W-78 was driving recklessly at a high rate of speed down Delano Street, near Colvin Street, on Rochester's west side, in my old neighborhood, a neighborhood where children are always playing outside, when he lost control of his cruiser, and ended up flipping it on its side, as you can see in the photo below, just a few feet away from a home.
Neighbors say that a Rochester, NY Police cruiser was chasing another vehicle when a second RPD cruiser swerved in order to avoid hitting the first cruiser.
That's when the officer lost control of his cruiser, and flipped it.
"All we saw was the police car come flying around the corner and then it flipped," said a neighbor, who out of fear of retaliation by Rochester Police, asked me not to publish their name.
"My family was having a barbecue outside, the officer could have hit the house, is it really worth it?"
"It's not safe at all, they shouldn't be driving like that down our streets."
Imagine if an innocent child just happened to be riding his or her bike when the Rochester Police cruiser comes racing around the corner, flying at high speeds, flips and kills an innocent child.

Rochester, NY Police cruiser W-78 after it flipped over on Delamo Street.
Reminds me of a young man named Trayvonne Pritchett.
The 14-year old was struck and killed by rookie, probationary Rochester, NY Poloce officer Scott Calkins, while riding his bike on North Clinton Ave. in October of 2010.
Rochester Police officer Scott Calkins was also driving recklessly, traveling at unsafe speeds, responding to call.
Officer Scott Calkins, who was very inexperienced, was being supervised by RPD Field Training Officer Josh Lewis, who was in the passenger seat.
It seems like every time we turn around, a Rochester Police officer is crashing.
Many times the officer is driving recklessly, at high speeds,with no regard for innocent motorists or children at play.
And many times, the Rochester Police Department tries their darnest to keep these crashes by Rochester Police officers, on the low.
In fact when it comes to the Rochester Police cruiser that flipped last year, I was the only one who covered of right here on my blog, after a neighbor sent me the photo.
None of Rochester's mainstream news media reported on it.
Not surprising really.
You see, I've always written about the relationship that mainstream news mechanic has with law enforcement agencies.
Simply put, mainstream news media relies on law enforcement agencies for tips, leads, and to be kept "in the loop" when it comes to major news stories.
And it's a relationship which mainstream news media will protect at any cost.
I call it the "don't bite the hand that feeds you" approach which mainstream news media takes when it comes to law enforcement.
And most recently, just this past Wednesday, a Rochester, NY Police officer crashed his cruiser into a vehicle, and then the officer smashed his cruiser into the side of a grocery store at the corner of Ames and Jay Streets on Rochester's west side.
The crash sent three people, including the RPD officer to the hospital. 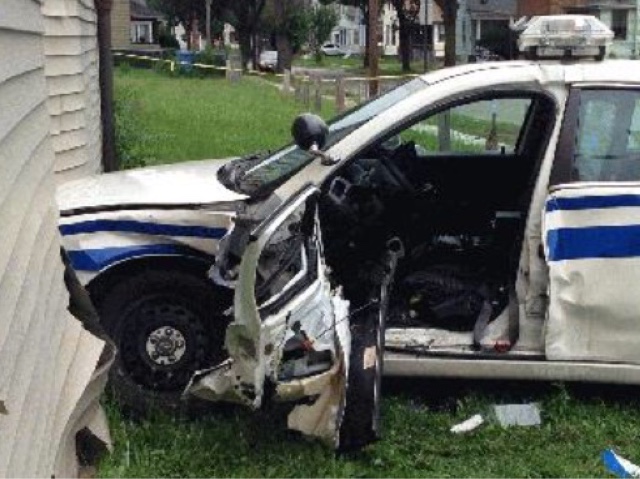 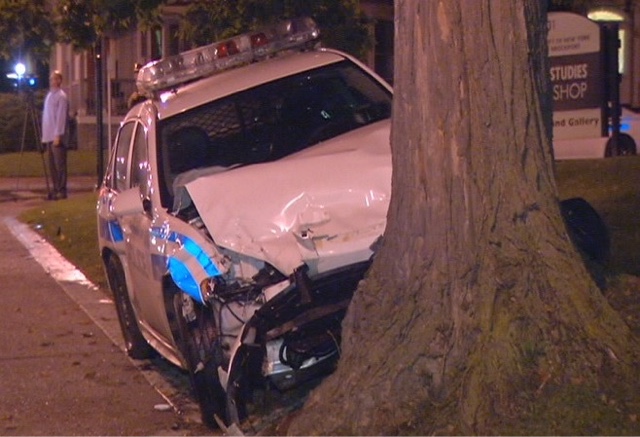 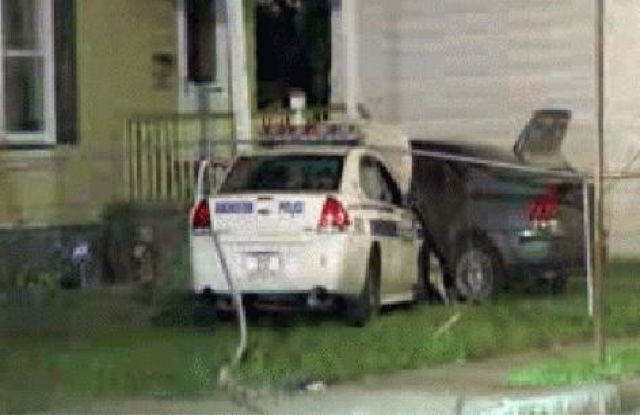 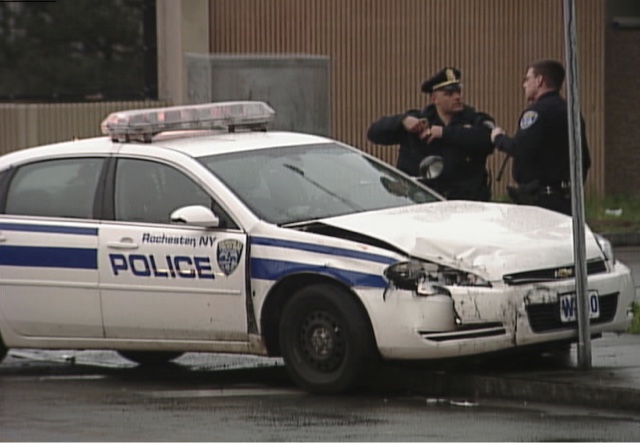