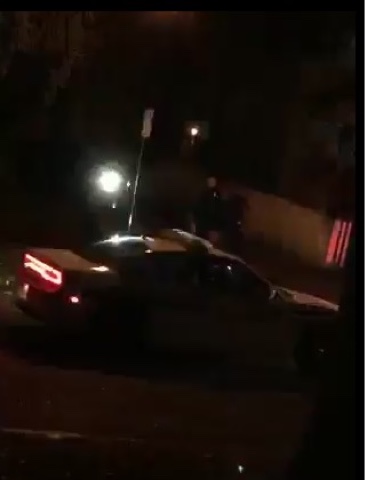 Rochester, NY Police officer shines light at woman after tasering black man
By Davy V.
"They were already beating and tasering him before I started recording."
That's what a Rochester, NY man said to me, in a phone interview Wednesday afternoon.
The man is referring to a video he captured with his cellphone, around 2:00 a.m. Wednesday morning which shows at least one white Rochester, NY Police officer striking a black man who appears to be down on the ground next to an RPD cruiser.
The incident took place on Columbia Avenue, on Rochester's west side.
In the video which can be hard to see, as it's dark outside, a Rochester, NY Police officer can be heard yelling at the black man, "Put your hands behind your fucking back!", while another Rochester cop is heard saying, "John, lets spark him again!", referring to tasering the man again.
The Rochester cop is then seen tasering the man.
A woman who is standing on her porch can be heard telling police officers ,"You ain't gotta tase him like that."
The woman is then heard saying, "They're gonna tase that man to death."
"Yeah how bout he doesn't fight, how bout that?", a Rochester cop yells at the woman, while shining his bright flashlight at her.
The woman is then heard on the video saying, "He's already on the ground, why y'all had to tase him like that?"
According to the man who sent me the video, and who asked me to keep his name anonymous, the man was taken to the hospital.
I will be updating this piece of more details become available.
CLICK LINK BELOW TO WATCH VIDEO
http://youtu.be/9NKEqYi2Hyk
Follow me on twitter
https://twitter.com/davyvara
"Like" and Follow me on Facebook
https://www.facebook.com/davyvara
Posted by Davy V. at 9:43 AM