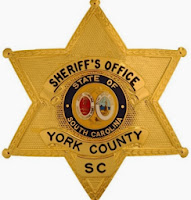 By Davy V.
A South Carolina Sheriff's dashcam captures what at first seems like a routine traffic stop, but ends with a 70-year old man shot by the deputy who pulled him over.
The video also captures the deputy crying, begging God for forgiveness.
York County Sheriff deputy Terrence Knox pulls over 70-year old Bobby Canipe's F-150 pickup Tuesday night around 7:30 p.m., on U.S. 321 for having expired license plates.
As deputy Knox is on his radio, Canipe gets out of his truck.
Canipe, a disabled veteran, then reaches into the bed of his pickup truck, for his walking cane.
Deputy Knox then yells at Canipe "Hey sir, sir whoa!", before firing several shots at Canipe, hitting him at least once.
Knox then yells "Drop the gun!", before he runs over to Canipe.
"Are you ok?" Knox is heard asking Canipe.
"Oh, it hurts," says Canipe.
Deputy Knox is then seen and heard breaking down, as he becomes distraught and begins crying.
"Oh God forgive me," Knox says.
"He pulled his cane out."
"It looked like a shotgun, I promise to God," Knox says.
As for Sheriff Bruce Bryant, he says that while it's an unfortunate situation, he too would have shot the disabled veteran.
"I would have had to take the same action he did."
The shooting is the 9th officer-involved shooting in South Carolina, just this year.
That means that so far, in 2014, one person has been shot by a police officer each week.
The State Law Enforcement Division says officer-involved shootings in South Carolina are on the rise, with 42 reported in 2013.
That's up from 27 people shot by police officers in South Carolina in 2009.

Bobby Canipe is expected to survive.