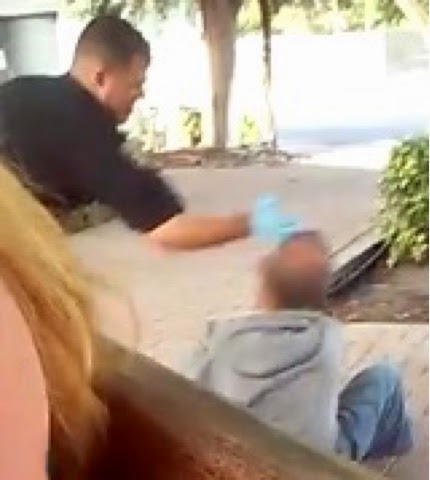 Fort Lauderdale, Florida cop Victor Ramirez assaults homeless man
By Davy V.
A disturbing video posted on YouTube this past weekend shows a Fort Lauderdale, Florida police officer assaulting an elderly homeless man, all because the man needed to pee.
The cop, Ft. Lauderdale Police officer Victor Ramirez.
The video begins with officer Ramirez putting on some blue latex gloves, as he follows the homeless man at a bus station.
Ramirez is seen grabbing the man's arm, and then he pushes the man, who falls down on the concrete pavement.
Ramirez then tells the man, "I'm telling you right now what's going to happen!"
The man is heard telling Ramirez that he just wants to pee.
"You're not going to pee," Ramirez tells the man.
"You're not supposed to pee here."
An irate Ramirez then slaps the homeless man hard on the left side of his face, then yells at the man, "I'm not fucking around with you!"
Click the link below to read Cassandra Rules' piece on this disgusting incident, on my favorite site, The Free Thought Project.
http://thefreethoughtproject.com/power-tripping-cop-pushes-elderly-man-slaps-good-reason/
Follow me on twitter
https://twitter.com/davyvara
Posted by Davy V. at 7:29 PM