Trump: In The End All This Says More About Us Than About Him 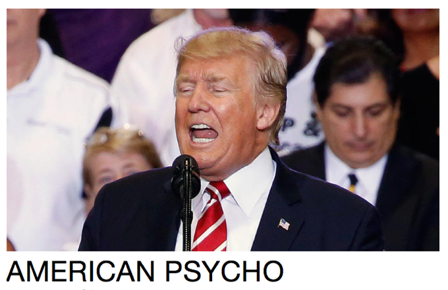 Here is my further understanding of Trump and the dynamics at work seven months in:

1) Yes, he is mentally ill (on some level, no doubt at this point -- people/experts are beginning to talk about it openly).

2) Yes, he has an immoral character and is ego-based -- on a massive, pathological level.

3) The previous two points add up to the as-yet-unofficial diagnostic category of "malignant Narcissism" -- or we can simply combine the two existing diagnoses of Narcissistic and Anti-Social Personality Disorders; in essence a sociopath.

4 Trump is stupid, undisciplined, and lacks effectiveness (many are not aware of his many failures as a businessman and how only "branding" and TV celebrity shored him up -- what serious businessman/billionaire would humiliate himself with a gaudy show like Celebrity Apprentice?).

5) However, there is a method to his madness...a dark, destructive method.

6) The goal is Trumpism, not a primarily ideological or political movement, but primarily in service to his ego... a "cult of personality" as was Stalinism, Maosim, etc. (Trump has no core values, he could've gone extreme left, but the "season" was ripe for going extreme right, as the ground was fertile for a GOP take-over).

7) Trump cannot legitimately expand his base beyond resentment-filled crazies by reaching out to "non-Deplorables" -- regular sane folks, principled Republicans, Dems and independents (he did in 2016, persuading enough independents/counting on dislike of Hillary, etc., to win the Electoral College (although a massive loss of the popular vote) but knows he can't do that again -- it was a fluke (some of the worst things in life happen as a fluke; but then gain traction/expand).

8) So, what Trump is doing (as often happens with characterologically disturbed persons in romantic relationships, on an individual level) is launching a sustained, hysterical, blunt attack on values, principles and institutions: inciting out-and-out chaos, division and insanity in the populace, hoping that itself will damage the nation; he seeks to create massive outrage on all sides (different reasons, obviously), spread resentment and hate, awaken and normalize previously taboo racism/prejudice, provoke opponents into shrill, extreme reactions (perhaps even violence, so his opponents look bad, and he can make his "all sides" false equivalency between neo-Nazis/white supremacists and liberals/the Resistance).

9) And thus Trump hopes to increase his 1/4 to 1/3 of his current hard-core, "he-can-do-no-wrong" supporters to at least 50%; part of his undisciplined, chaotic, "Trump-intuitive" (and perhaps effective, in the end) strategy is to crush the the more thoughtful, principled aspects of the GOP and complete his hostile take-over of the party, then he can have full control over it and it can be a vehicle solely devoted to Trumpism (obviously the GOP years ago abandoned thoughtful, principled, "philosophical" conservatism and allowed the "percolation" of these dynamics through birthism/Tea Party/Fox News/Sarah Palin type dynamics; I am not saying they are blameless by any means -- they dumbed-down their message and created two monsters: an unprincipled, stupid electorate and onerous, dangerous POTUS, that now they're unable to control and threatens the traditional GOP.

10) Remember: Nazism didn't develop/expand overnight; it involved initial period of preparing the soil/planting seeds/persuading the populace. I am well aware this cannot be a 1 to 1 ratio comparison historically, but it applies nonetheless; preexisting hateful sentiments have always been there, somewhat dormant in recent years, much as anti-Semitism was in Germany -- and the current "mad leader" techniques to expand it are underway here-and-now.

11) By using these techniques of resentment, fear, and hate Trump wants to expand his "Deplorable" numbers themselves -- rather than expand his base by diversifying or creating a "bigger tent" for the GOP (as major parties usually attempt, if half-heartedly at times).

12) Finally: much as with Germany 1930s, liberals and intellectuals may be underestimating how such tactics can work over time...and how stupid and evil can join hands and spread. In the end, Trump's character tests the charter of our nation... and whatever happens, whichever way this thing goes in the next few years, it says more about us than about him. 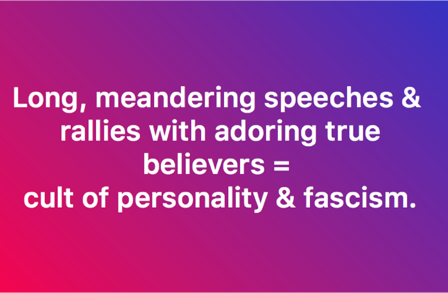 MJ Vara is a regular contributor on The Davy V. Blog. Check back to read more of his columns.
Posted by Davy V. at 4:41 PM